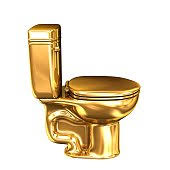 Someone sitting on a pot of gold has suddenly got a literal meaning. There is a good story about a pot of gold.

Once a man loses everything and defeated he goes to another village and takes shelter under a tree outside a temple. Since his appearance is quite run down and his clothes are tattered, the villagers visiting the temple take pity on him and offer him some money and food. Many villagers do this and the man decides to stay there. He gets used to this charity from the villagers and he slips into the role of a beggar. The villagers don’t like beggars outside their temple but being humane, they continue their charity towards him. Many years pass with these state of affairs and one day, the man dies. After cremating him, the villagers decide that there will be no more beggars outside their village temple. They start cleaning up the surroundings, where the man had made his dwelling, and stumble upon a pot of gold, when they try to level the ground to beautify it. Moral of the story – the man was always sitting on a pot of gold but he had become lazy and could never realise his potential.

But the current story has no such morals. Recently in America (where else), in a New York Museum, the connoisseurs are given a chance to sit on a Golden Throne. Yes, in America, a golden potty becomes a golden throne. It is an installation by Italian artist, Cattelan, fully usable. And people are eating beyond their capacities, to get a chance to use the golden throne and earn some bragging rights on social media. And no, selfies are not allowed when using the golden throne. Otherwise it would have broken the Internet. So, the people are scampering to sit (with the ‘h’ silent), literally on a pot of gold. I did not know the art market in the west is so advanced that people are involved with all their guts and glory.