As man evolved, he understood that, compared to other animals, he was a weakling. This was apparent on his various hunting expeditions to provide food for his dependents.

In addition to many other parameters, he lacked in speed. Most of the time, his prey galloped away or ran away, and he was left panting by the wayside.

Thus his need to domesticate various other animals like the horse to gain speed. This was his preferred means of transport, whenever he needed to travel faster, till the industrial revolution, when mechanised vehicles were introduced in the form of cars.

But these cars ran on petrol or diesel which were in short supply, hence expensive. 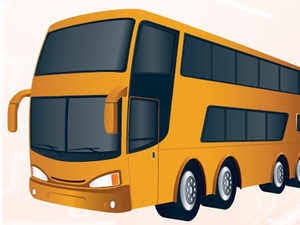 He felt the need to transport a larger number of people at a time and thus a bus was born. Though it ran on the same expensive fuel, the higher numbers it carried made it economical. But this dependence on buses and cars for faster travelling meant burning of the highly polluting fuels which became one of the major factors of global warming.

Thus started the search for cleaner and inexpensive energy sources.

Electrical energy is cleaner and today it is taking baby steps towards electric cars but there are other cheaper energy sources too, on which buses and cars can run. Like CNG, LPG, etc. but man is never satisfied.

Which brings us to the news which I read today.

It seems UK has taken a very important step where they have test driven a bus run by poo.

Coming to think of it, it certainly would be inexpensive as it gets generated regularly, mostly every morning. Of course, there are those unique specimens who generate it untimely. And then there are few who fall ill and cannot hold it in and have to rush to generate.

There are enough species who do this extremely important social work day in and day out and contribute to reducing the global warming. My salutations to the scientists who conceived this unique energy source, based on methane conversion.

The day is not far, when this poo generation takes the form of an industry where various species are lined together every morning to generate energy for the ever growing vehicle numbers.

Already I see the importance of certain middle Eastern countries going down and corresponding elevation of another country which already has such an industry lining the huge network of railway tracks all across the length and breadth of its vast geography. It just needs to be tapped and exploited in a proper way.

This is a text widget, which allows you to add text or HTML to your sidebar. You can use them to display text, links, images, HTML, or a combination of these. Edit them in the Widget section of the Customizer.
Loading Comments...
%d bloggers like this: