The culture of coffee and tea machines took its hold and slowly but surely, the assorted cups and saucers disappeared to be replaced by the self service culture. 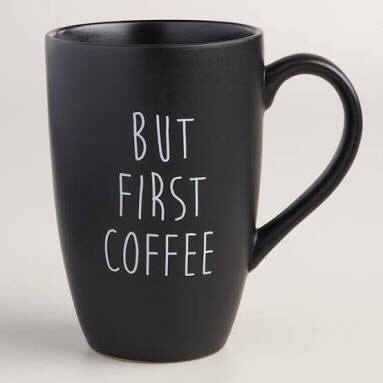 In these offices the ladies were the equal of men and they brought about the revolution in having personalised coffee mugs. In addition to the other paraphernalia on the office desk, these dainty mugs occupied a pride of place.

The very first thing after coming to office, the mugs were washed by the ladies themselves; after all cleanliness is very important. Then the mug was filled with the drink of choice, which then occupied the table as an accessory.

As more and more ladies took up this hobby, each of them wanted their mugs to be unique. The Rs. 99/- shops took advantage of this obsession and brought out beautifully coloured mugs which were much coveted by the working ladies.

As coloured mugs became common, some shrewd entrepreneur thought of mugs with a message. These mugs appealed to those male colleagues, who had always thought that having a personalised mug was a sign of feminity. Especially the mugs with funny and naughty messages were very popular with them. Thus mugs had truly captured the office space.

But the real fun started when the mugs culture of IT and Call centre field migrated to other traditional businesses.

Here, the bosses introduced the mug culture. First and foremost, the mugs became larger in size and denoted the status of the user. The colours became more masculine and black or dark maroon or chocolate was the preferred colour.

But old habits die hard and the bosses did not believe in self service. Thus commands were given to the tea boy to regularly check on the level of the drink inside the bosses mugs and he was put on auto refill.

And what did they drink?

Not the humble tea or coffee, but exotic sounding drinks like green tea, cinnamon tea, lemon tea, cappuccino, et al. Sugar got replaced by artificial sweeteners like aspartame, stevia products, corn syrup and if natural sugar was required then the preferred one was honey.

And since the bosses status was to be maintained, such mugs became more expensive and more ornamental. Thus, such mugs were out of the reach of the common office worker, whether a he or she.

But the ambitious among them still went ahead and bought them and they were now considered as ‘must have’ office accessories. In the office, the mugs  now had aspirational value. In the same way that cars became common in the parking lots of the offices, the mugs too became common inside the office space.

2 thoughts on “The Coffee mug”

This is a text widget, which allows you to add text or HTML to your sidebar. You can use them to display text, links, images, HTML, or a combination of these. Edit them in the Widget section of the Customizer.
Loading Comments...
%d bloggers like this: